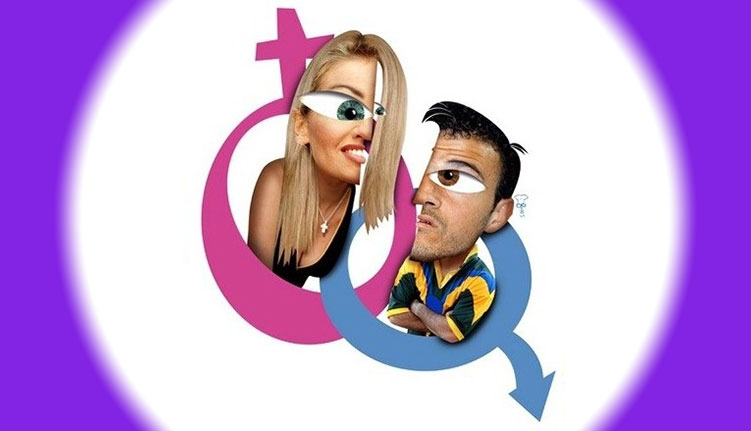 Lately I’ve found myself in a number of heated debates over whether or not males and females can just be friends. No strings. No sex. No messy behavior – just unconditional, uncomplicated, unreserved friendship. That’s why we decided to delve into this issue to see what we could come up with: If men are from Mars and women are from Venus, it may clarify at least one of our mutual beliefs: that the majority believes that men and women can’t be real friends. Blame the sexual pressure that almost inevitably exists between any hearty, heterosexual man and woman – we have trouble, in our Middle Eastern culture with any love that isn’t based on sex or blood. We understand romantic relationships, and we understand family, but anything in between is simply unacceptable.

Most of my teenage years were spent with my older brother and his friends. I have a sister, but she married early and for this reason, I’ve always had lots of platonic male friends. To me, the stereotype that “men and women can never truly be friends” is foolish. My mother used to say: “In my days, men and women weren’t allowed to meet without chaperones.” With all due respect Mom, that was then – but this is now. Friendships with members of the opposite sex have been an essential part of my life since I went to high school in the late 1990s, and I hardly think I’m alone. Consult your own experience, but as I look around, I don’t see that platonic friendships are actually rare at all, or worthy of loads of winks and nudge-nudges. These days’ things are different; of course men and women can just be friends. It’s happening all around us. Just look at the countless workplaces where colleagues find themselves spending long hours together, working late, travelling, sharing breaks, meals and chatting in the office canteen.

Whatever the challenges of male-female friendship, researchers agree that to succeed as friends, both genders have to openly and honestly discuss exactly what their relationship will mean — whether sexual attraction is a factor and how they’ll deal with it, in addition to establishing clear boundaries. Experts say that, the friendships that survived – and even thrived after attraction were those in which the friends extensively discussed their position and felt confident and positive about each other’s feelings. Once they got past that, they were home free. So basically, to maintain a male-female friendship you must both be frank enough to talk about what your friendship means. Talk about expectations, so there are no misunderstandings. Your best same-gender friends are compassionate, perceptive and validating. You should expect no less from this friend! If any tension exists below the surface, it could be a result of relationship issues either or both of you have because you are married or involved with a significant other. Ignoring the tension won’t make it go away — it will only make it more prominent.

Oscar Wilde once said, “Between men and women there is no friendship possible. There is passion, enmity, worship, love, but no friendship.” Well mister Wilde, I beg to differ. Although sometimes there is awkwardness stemming from affection, people tend to underestimate their own ability to move past an uncomfortable situation and embrace a meaningful friendship with someone they value. And given the struggle we all have in understanding the opposite sex, having a friend from the other side can be a genuine asset. I was recently discussing this issue with my older brother, he confessed and went on to explain that given the suspicious atmosphere that surrounds crosssex friendships, some men are reluctant to take on a mentor role with the younger female coworker, with the confusion surrounding sexual harassment issues making them even warier. Another female relative of mine passionately declared, “Forget it, these friendships will never, ever work! One always falls in love with another,” while another male friend revealed, “I tried to be ‘just mates’ with a girl once, you know hang out and have some fun. But after a few times, she gave me an ultimatum – ‘propose to me or else!’”.

Part of this confusion stems from the media. A classic film starring Meg Ryan and Billy Crystal influenced a nation of moviegoers that sex always comes between men and women, making true friendship impossible, when Harry Met Sally set the potential for male-female friendship back about 25 years. Television hasn’t helped either. Almost every time you see a male-female friendship, it winds up turning into romance. Think about it – Chandler and Monica from ‘Friends’ is a perfect example. These cultural images are hard to overcome. It’s no wonder we expect that men and women are always on the highway to romance.

In all honesty, I believe that both men and women miss out if we fail to support cross-sex friendships. Yes, it’s an uncomfortable truth that many people share far more of their waking hours with work colleagues than with a spouse. But our cultural assumptions about the bodily nature of all male-female friendships simply feed the green-eyed monster, adding to unavoidable marital tensions. It’s inevitable that strong bonds and close friendships will develop, that the work chat may sometimes stray into more intimate talk as men and women share confidences and look
to each other for support. But that’s where our sense of right, wrong and principles come in. We all know our vulnerabilities. If you’re wondering whether you’ve overstepped any boundaries, Dr. Shirley Glass says three signs indicate that a friendship between people of the opposite sex has crossed the line:

Also, ask yourself, “Do I say or do things with this person that I wouldn’t want my spouse to see or hear?” If so, then it’s time to take a step back and re-draw your boundaries and practice your morality.

To summarize, there are always common factors in friendships… mutual interests, trust and open discussion. If you and a guy have known each other for years, the likelihood of maintaining a friendship without sexual overtones is better than it would be with a newer friend. A lot of men are actually more comfortable with a female friend, finding them more empathetic and easier to talk to. Like in most friendships, the key seems to be honesty. The complications will only arise when there is a physical attraction – for either or both of you, and a lack of transparency. As a culture we do not know very much about discipline. We assume that if something or someone is accessible to us, there is usually no good reason why we should not claim it. We are not well trained in saying no. That’s why I truly believe that at different stages in our lives, being above all open-minded can open up space for a wholesome platonic friendship, as well as for new gifts and opportunities for delicate growth…

Who Said You Can’t Be Pregnant & Fashionable at the same time?

Does your Devil wear Prada…?