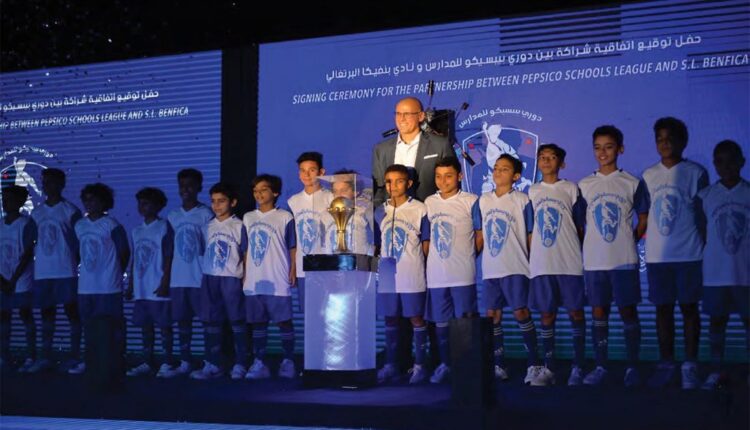 PepsiCo Schools League signed a cooperation protocol with Benfica, one of the three largest Portuguese clubs in Portugal, and Radiant, the leading sports firm.

The conference was attended by Mr. Mohamed Shelbaya, CEO of PepsiCo Egypt Commercial Unit, Mr. Miguel
Monteiro, President of the Commercial Sector of the Benfica Club, Mr. Mohamed Tawila, Chairman of Radiant Company, the international player Nuno Gomes, the Egyptian Coach Hassan Shehata and Captain Ahmed Shobeir as the event host. The celebration also showcased the African Cup of Nations trophy as part of the ceremony, in its final appearance before the championship kicks off.

This promising protocol will give PepsiCo Schools League’s players the chance to train according to Benfica’s international standards and will provide them with the technical know-how to develop their abilities and help them qualify for local and international clubs. “Mohamed Salah’s successful model represents PepsiCo Schools League’s belief that nothing is impossible, and everyone can make their dream come true with persistence and dedication. This is our role to discover, develop young talents and provide them with the necessary support to shine. We are confident that our partnership with Benfica will be a key milestone in the future success of PepsiCo Schools League,” said Mohamed Shelbaya, CEO and Chairman of PepsiCo Egypt Commercial Unit.

“We have been sponsoring the Egyptian national team for more than eleven years and providing them with the needed talents to enrich the Egyptian football sector and I am sure that the nine graduate players from PepsiCo Schools League such as Mo Salah, Al-Nenny, Al-Shennawy and Truezeget will make us proud in the African Cup of Nations. I am very happy with the presence of the African Cup of Nations trophy today and I believe PepsiCo Schools League is the source of discovering and highlighting talents supporting the Egyptian national team,” he added.

Benfica Club is known to be attentive to the signs of time, looking to act and collaborate, at all levels, in an active and serious way for the progress of football. It has one of the leading youth development academies launched in 2008, which successfully highlighted and developed the skills of some of the world-class talents over the past 16 years, supporting them with the latest methodologies and technical development programs. “We are looking forward to help Egyptian talents qualify and achieve their dreams. PepsiCo Schools League is keen to develop Egyptian youth and transfer technical know-how to be able to join world-class clubs such as S.L Benfica. After this important partnership, we will scout more talents and prepare them in a more efficient way,” said Miguel Monteiro, Benfica Club’s President of Commercial sector.

“I am honored to witness this important protocol signing between PepsiCo Schools League and my home team; Benfica Club.” In a word, Nuno Gomes, the former Benfica player was directing to PSL players: “Today, you will have the chance to train according to Benfica’s international standards, which will provide you with the technical know-how to develop your abilities and help you qualify for local and international clubs. Seize this opportunity to shine.”

Building on the heritage of PepsiCo Schools League, Pepsi screened its latest advertisement as part of its African Cup of Nations celebrations exclusively for the conference attendees. PepsiCo is always keen to be part of every celebration revealing their creative campaigns and spreading joy.

The Key to HUAWEI P30 Lite’s Success: super features for a sub-flagship smartphone