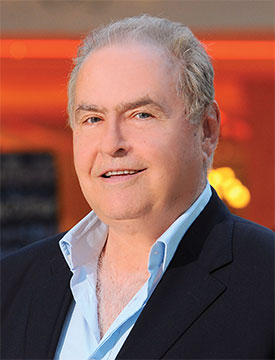 Sami Zoghbi, One of a kind

There isn’t a single hotelier who doesn’t know Sami Zoghbi. Please briefly tell our readers how you became involved in tourism.
My Father and mother owned their own hotel, and I became so interested and intrigued with it all — it became a big part of my daily life. I graduated from the University of Lausanne, Switzerland. I worked in Switzerland, Ireland, and in the far east, Hong Kong to be specific. Multiple posts across the world that provided me with incredible experience in the tourism industry. By 28 I found myself General Manager of a 600 bedroom Hotel in London. And from there things took off – There’s only one way up.

You were here in Egypt and saw ITT, when it was at its highest and greatest peak. Now looking back and knowing that it had to be sold, what are your thoughts with regards to this particular period…?
Well, first of all we have to realize that its not uncommon for Worldwide, multinational companies to be sold and taken over by new management. This can happen for multiple reasons, nothing specific. Hilton ITT bought Las Vegas Casinos, keeping in mind that the key driver of Hilton US is Casinos. So, they bought Sheraton as part of the deal. The second reason was that Hilton Domestic was not part of Hilton International and they wanted to become transnational. Therefore, Sheraton was a credible trademark to become multinational – and, when all else failed they became Conrad casino. Subsequently, Starwood came forward with another superior offer and they
took over — and now, as you may know Marriott assumed possession. Up until today, I genuinely find my loyalty to ITT, although I briefly worked with Starwood – I must admit, I was never convinced with their strategies. Frankly speaking, neither was I. I didn’t like their style, nor their management, as opposed to ITT, who I believe were an international giant. Each corporation carried out completely different perspectives.

Sheraton hotels in Egypt were always recognized for being amazing. I worked with them, and as one of it’s staff – we sensed a feeling of strength and pride to be part of it. In your opinion, what’s the reason behind the abrupt, dramatic cessation…?
Any failing company has no one to blame except for its management. A global perspective is a matter of survival for businesses. Left or right, the only explanation is that the management had no interest in Egypt, and no interest in growing and becoming more successful. Management is everything – it is the process of specifying an organization’s objectives, developing policies and plans to achieve these objectives, and allocating resources so as to implement the plans.

Tell us a little about Fairmont Heliopolis “Sheraton at that time”. We’ve all heard about the obstacles you faced with regards to the building, and your choice of location was labeled as “completely deserted”…?
Yes, the actual building was built more than 25 years ago. Ironically now the entire suburb goes by the name of “Sheraton”, however the revamped Fairmont Heliopolis has only been around for six years. The new extension, which has been totally recreated is absolutely amazing.

What would you consider be the reason why the hotel isn’t doing so well…?
Every country has a pattern where tourism is at its peak. Egypt, and Cairo in specific was always fully booked during summer and Ramadan etc. But Egypt’s existing state since the revolution isn’t helping. Even though the fact that Arab tourism still exists to some extent – the location doesn’t serve their desires. They prefer crowded places with malls etc. And of course, international tourism is non-existent.

How do you see the future of Egyptian tourism. What are some short and long term goals that can be achieved by 2016/2017 and also, within maybe five or ten years…?
Despite improving throughout the past years, the Egyptian tourism industry continues to be underdeveloped. There’s a shortage of an adequately qualified workforce, an underdeveloped transport network and infrastructure, impediments in the structural and institutional framework, just to name a few of the countless hindrances of the sector’s development. Egypt needs to realize that it’s blessed with 3000 km of breathtaking coasts, and timeless archaeology. The government needs to stop and focus and ask themselves – what do I want from this sector.? What is my target? Where do I want Egypt to stand in 2020. A master plan must be administrated. The proliferation and negative impact of bureaucracy must be addressed. Things like Coastal shores opened and selling for $1/meter must vanish. These things destructed the entire sector. This is not tourism, everything is undefined. The government must have insight, and more importantly – have a master plan. It’s imperative that they acknowledge the country’s wealth, and accordingly seek international experience…

Do you think it’s the past, previous and future Minister of Tourism’s fault for all these failures …?
No, no of course not. The government as a whole is responsible. Like I said, it’s imperative that they seek international experience to guide them and set a plan and strategy to identify, determine and analyze the sectors problems and prioritize them in terms of urgency and magnitude, without this — nothing will change.

What is the difference between Sami Zoghbi in the 1980’s, as opposed to after the millennium…?
Hmmm, more experience. Obviously I’m getting older – but that’s insignificant when compared to the increase of experience.

Do you believe in the techniques of the Six Sigma…?
Yes and no. Good management must rely on different systems to improve performance. However, like any system you can use it to the point of being obsolete. Starwood incorporated this data driven approach and I honestly saw no difference. Good management is good management – and that’s what makes a difference.

On a more personal note – what kind of things do you do in your spare time…?.
I have been blessed with grand children. I always believe in balance between work and pleasure – it clears the mind, so we can concentrate and avoid becoming counterproductive.