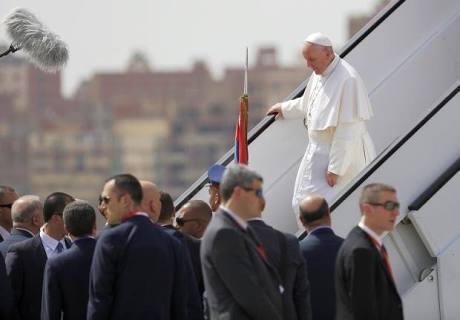 Pope Francis arrives in Egypt for a historic visit

Pope Francis arrives in Egypt for a historic visit

Pope Francis addressed the gathering of public figures. Again, Francis said he is happy to be in Egypt, the country of an old civilization, and called it ‘Oum Al-Dunya’ – “Mother of the World.”

In a wide-ranging speech he covered a number of topics. He expressed hope for peace in the region, “for Palestine and Israel, for Syria, for Libya, for South Sudan, and for everyone across the region.”

El-Sisi in his address welcomes Francis as a “dear guest and a spiritual leader to people across the world from different religions.”

He praised the pontiff for his efforts to promote international peace, and said that the joint cooperation between Egypt and the Vatican that has been established at the diplomatic level for 70 years should help the cause of peace.

The president also said that Egypt stands at the forefront of international efforts to confront terror and would continue to do so while cleaving to its unity and its history as a land of diversity and tolerance.

The president also announced that 10 May would be a “day of friendship” in Egypt between the Catholic and Coptic churches.

El-Sisi reiterated that Egypt stands in the front lines of combating terrorism, calling on “peace-loving countries” to cooperate to eradicate the phenomenon, which would entail destroying the terrorists’ infrastructure as well as stopping the recruitment of new elements to terrorist groups.

17:20 Pope Francis has arrived at the Al-Massa Hotel, where he has been joined by President El-Sisi for a session with a group of dignitaries and ministers. El-Sisi is now addressing the room.

17:00 The pope has finished speaking and has left the conference room with the sheikh of Al-Azhar.

Francis is now scheduled to go to Al-Massa Hotel in Nasr City for a brief rest and lunch. He will then go to St Mark’s Coptic Orthodox Cathedral in Abbasiya, for talks with the head of the Coptic Orthodox Church, Pope Tawadros.

The two prelates will pray together in St Peter and St Paul’s Church, a small church adjoining the cathedral complex that was targeted by a suicide bomber in December, an attack which killed 30 people.

In his address, he tells gathered religious dignitaries that “we should reiterate our rejection of any violence that is committed in the name of God.”

“Today we have an immense need to create peace not division.”

16:30 In his statement, the grand imam of Al-Azhar blames international arms trafficking and reckless international political decisions for the “state of chaos” that prevails in so many countries.

The grand imam says this is the moment for religions to take up the call of peace, equality and dignity of all humans – irrespective of faith or colour.

The grand imam expresses gratitude for the poe’s remarks in which he has rejected the association of Islam with terror.

16:20 Pope Francis and Al-Azhar’s Grand Imam Ahmed El-Tayyeb have arrived at the closing session of the Al-Azhar peace conference, which began yesterday.

Both men are sitting on the stage; the sheikh is now giving an address, and begun by requesting the audience stand for a minute’s silence to commemorate the victims of terrorism in Egypt and globally, regardless of their religions.

The pope is expected to speak next.

15:35 Pope Francis left the presidential palace without speaking to the press, and has arrived at Al-Azhar institution headquarters in Cairo to meet with Grand Imam Ahmed El-Tayeb. The two met previously when El-Tayeb visited the Vatican in July 2016.

15:00 According to sources, President El-Sisi and the pope will discuss a number of issues now, including developments in the Middle East, especially the rise of radicalism, relations between the Catholic church and the Islamic world, and some bilateral issues. A European diplomatic source told press that the murder of Italian researcher Giulio Regeni in Cairo will also be raised by Pope Francis, “upon the request of the Regeni family.”

The doctoral student’s body was found on 3 February last year by a roadside on the outskirts of Cairo, bearing signs of torture. Italian and Egyptian prosecutors have been investigating the murder.

14:41 President Abdel-Fattah El-Sisi received Pope Francis at the entrance of the presidential headquarters in Heliopolis. The president had a brief exchange of cordial words with the visiting dignitary, amid the music of an official reception ceremony. the two are set to hold private discussions before speaking to the press.

14:12 A number of Coptic and Catholic church officials along with Prime Minister Sherif Ismail received Pope Francis at the airport. The pope will head first to Ittihadiya Presidential Palace to meet President Abdel-Fattah El-Sisi.

12:37 Security in Cairo has been ramped up since late Thursday and the early hours of Friday. Police are stationed every few hundred metres on roads leading to downtown, the airport and in the vicinity of Ittihadiya Presidential Palace.

10:35 Pope Francis has departed on his flight from Rome to Cairo. He is expected to arrive at 2pm local time.

“NO Disease, including cancer, can exist in an alkaline environment”