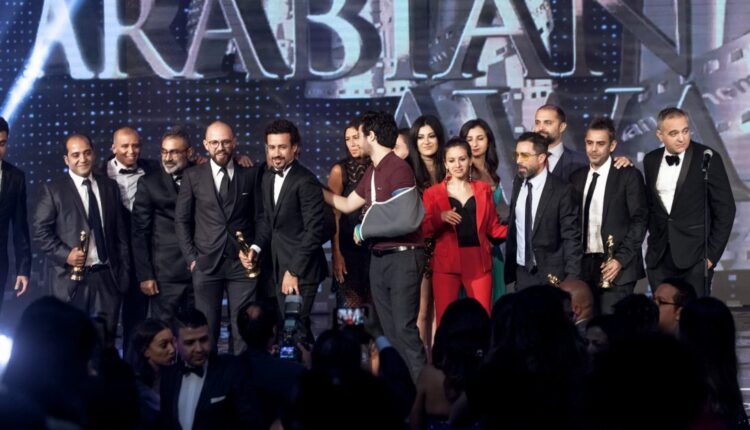 The ACA is an up and coming annual Arab award ceremony owned and hosted by DearGuest Magazine to recognize excellence in cinematic achievements within the film industry as assessed by the Academy’s voting members. This year there were 20 various category winners whom were awarded a copy of a statuette, officially called the Award of Merit, which will become commonly known by its nickname the “Arab Oscar”.

In an effort to maintain a high degree of fairness and transparency in the voting process — It was the Academy’s goal to ensure that the awards competition was conducted in a fair and ethical manner. The Academy refined the rules in an effort to keep the campaigning fair and maintain the integrity of the industry’s highest honor. The ballots and the guild awards were in, and there was no more campaigning left to do for the 2017 ACAwards.

Cairo was getting ready for its most glittering night of the year as we found out who will get their hands on those golden statues — the jewel in the crown of award season, The 2017 Arabian Cinema Awards 2nd Edition was launched on Friday the 20th of October at the beautiful MUST Opera House. A large number of glamorous A-list stars walked the red carpet wowing their fans, and of course we were there to capture all the glitz and glamour with the hottest celebrities on the red carpet.

From his hilarious “Ismail Yassin” opening performance to his ongoing jokes, Edward had some great moments while hosting the 2017 ACAwards that had some of the biggest stars and viewers laughing, gasping and tweeting during the live show.

The ACA board added a few new categories this year. The Life Achievement Award is presented to honor a single individual for his and her lifetime contribution to enriching Arabian culture through motion pictures and television. Check the listing below: So here, the nominations and we’ve highlighted the winners since they have finally been revealed for the ACAwards, and as ever, the best picture category represents a fascinating snapshot of both the industry and the here and now. BEST ACTOR IN A LEADING ROLE: WINNER: MagedKedwany for his role in “Hepta”

Mahmoud Hemida for his role in “Nawara”

Ahmed Helmy for his role in “Laf w Dawaran”

Ahmed El Sakka for his role in “Min 30 Sana”

BEST ACTRESS IN A LEADING ROLE: WINNER: MennaShalaby for her role in “Nawara”

Nelly Karim for her role in “Eshtebak”

Yasmine Raesi for her role in “Hepta”

This award was given in honor of an actor/actress who delivered an outstanding performance in a supporting role while working within the film industry.

BEST ACTOR IN A SUPPORTING ROLE: Amir Saled for his role in “Nawara”

BEST ACTRESS IN A SUPPORTING ROLE: Mervat Amin for her role in “Min 30 Sanna”

GamilaAwad her role in “Hepta”

Nesrine Amin for her role in “AshanKhargeen”

Dina Sherbiny for her role in “Hepta”
BEST ACTOR IN A COMEDIAN ROLE: Ahmed Fahmy for his role in “Kalb Balady”

Shiko for his role in “Hamlet Freezer”

BEST ACTRESS IN A COMEDIAN ROLE: WINNER:Mona Zaki for her role in “Min 30 Sanna”

Aimy Samir Ghanem for her role in “AshanKhargeen”

Donia Samir Ghanem for her role in “Laf w Dawaran”

The Award for Best Cinematography, is an Academy Award awarded each year to a
cinematographer for work in one particular motion picture. The best Costume award can yield choices from a film of any kind, no matter what the reviews. This award was presented for achievement in film costume design. This award was given in honor of a film director who exhibited outstanding
directing. This seems like one of the many technical categories where “a particular
movie” could be considered a frontrunner, but the exhilarating energy of all the nominees listed below might just be enough to ensure who took the win. Makeup is one of the most essential elements of filmmaking. The film industry
abounds in numerous makeup artists, who are engaged in the task of
beautifying the performers. Makeup people play a great role in giving the perfect get-up to an actor, suiting the character he/she is playing in a movie. From classic up-dos, shiny tresses and sophisticated curls, to braided
up-dos and flowing waves to sleek ponytails, this award inspires the hottest hair
looks for whatever glam plot the planned scenario requires. Best Sound Editing is an Award granted to a film exhibiting the finest or
most aesthetic sound design or sound editing is the creation of sound effects. Best Sound Mixing is an Award that recognizes the finest or most euphonic
sound mixing or recording, and is can sometimes be awarded to the production
sound mixers and re-recording mixers of the winning film. One might think the winner for this category tended to be a summer
blockbuster, but for years the best visual effects award has gone to high profile fall
release. The Award for Best Original Screenplay is the Award for the best script
not based upon previously published material. The beautiful work of all the nominees made granting this award a
tough one. Who of these contenders did you believe would stand out among the rest…? This incredible award was presented to the songwriters who composed
the best original song written specifically for a film. So, the Arabian Cinema Awards celebrated its second year with a set of great films! And as seen above – the quality of work this year was outstanding and shortlisting nominees for the Academy to choose from was extremely difficult due to the sheer number of amazing talents they had to choose from. Well done to all the nominees and congratulations to the award winners.

Who do you support?

What are your thoughts regarding…Manipulating or seducing people to obtain what you do not deserve in the ‘Workplace’?