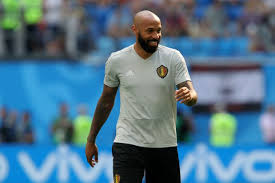 Henry, who enjoyed a stellar club career with Arsenal and Barcelona, had been assistant coach for the Belgian national team.

He replaces former Uruguay international Gus Poyet at the helm of the Ligue 1 side. Poyet had been suspended last week for his comments on the club’s transfer dealings after the sale of striker Gaetan Laborde to Montpellier.

RMC Sport said the club’s prospective new American owners, who agreed to buy Bordeaux from M6 at the end of July, still needed to validate the agreement.